Where I Get My Ethics from Part I: The 10 Commandments 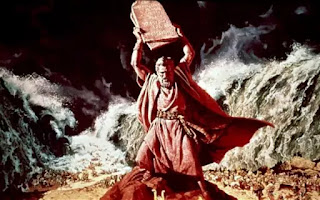 Being an atheist, I am constantly being asked the question of where I get my ethics from. My answer is very simple: the same place most people get them from, various sources, the 10 Commandments for example. As is the case with everybody, I cherry pick only the ones I agree with. Let's take a look at this, here's the text:
Hey, there are thirteen here... Oh well, blame Wikipedia for that. Enough for today, it is Sunday after all and I am supposed to be resting (or was it yesterday?) More about my ethics in future blogs.

Popular posts from this blog

February 04, 2007
Okay, the debate is over, I think it has finally become apparent that the consensus in the scientific community is that climate change not only is happening but it is most likely caused by human activity. The question is, what can we do now? I believe the short answer is: nothing. If indeed this is really a problem there is very little we can do now that will make a difference in the foreseeable future. The effects of climate change will not be immediate but gradual. When environmental problems occur and governments can realistically do something about them within a reasonable amount of time, as was the case with the London fog emergency in 1952, they do. In cases like that, it was very clear what needed to be done and there was a marked improvement in the situation in a very short time. The case of global warming is very different. First of all, it is not very clear what can be done. Yes, cutting down on carbon dioxide emissions may eventually improve things, but we
1 comment
Read more

Declaration of Independence, circa 2000.

January 08, 2006
Plagiarized  from the original by Thomas Jefferson,  July 4 1776 By Benny Pollak  In   New York , November 2000 (After the so-called election of Georges W. Bush as the 43rd President) WHEN in the Course of a Presidential Election, it becomes necessary for one People to dissolve the Political Bands which have connected them with their corrupt leaders, and to assume among the Powers of This Country, the separate and equal Station to which the Laws of Nature and of the United States Constitution entitle them, a decent Respect to the Opinions of the viewers of CNN around the World requires that they should declare the causes which impel them to the Separation. WE hold these Truths to be self-evident, that all Politicians are created equal, that they are endowed by their Creator, and their Wealthy Ancestry, with certain unalienable Traits, that among these are Arrogance, Self-righteousness and the Pursuit of Power -- That to secure these Traits, Political Parties are institut
Post a Comment
Read more